Home / Construction on Super Wawa in Westampton to begin next week

Construction on Super Wawa in Westampton to begin next week

The 5,585-square-foot Wawa with six fuel stations will replace the current Wawa convenience store at 76 Springside Road, which will close just before midnight Thursday and eventually be demolished.

WESTAMPTON — Nearly two years after the project was first approved, the construction of a new Super Wawa at the intersection of Springside and Woodlane roads is scheduled to begin next week.

The 5,585-square-foot Wawa with six fuel stations will replace the current Wawa convenience store at 76 Springside Road, which will close just before midnight Thursday and eventually be demolished.

Tom Verrichia, owner of the real estate development firm behind the project, The Verrichia Co., said that the development company was able to close on the property about a month ago and construction will begin on Tuesday. The store is expected to be completed before the end of 2019, Verrichia said.

The project also calls for the construction of a drive-thru fast food restaurant to be built next door along Springside Road. Verrichia said Wednesday that while there is not yet an official tenant, there are a number of potential parties interested in the restaurant space.

Construction on the second parcel of the project will begin after the Wawa is completed, Verrichia said.

Plans for the new Wawa were approved by the Westampton Land Development Board in June 2017.

At the time, some residents worried a new Wawa would attract crime and create more traffic problems, while township officials said the project would bring in additional revenue to help stabilize taxes. Since, however, some have wondered when the outdated Wawa would be getting its upgrade.

Verrichia said that it simply just took the company two years to finally be awarded all the necessary permits to begin construction.

The new Super Wawa is one of two approved in the township since 2017. Last May, a 5,585-square-foot store with 15 fuel pumps was approved to built on Rancocas Road near Highland Drive. The location on Rancocas Road could open as early as this fall. 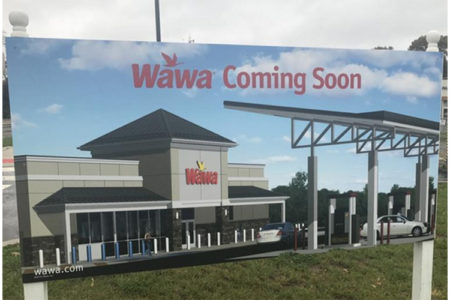 Our main focus is on targeting new and redevelopment commercial real estate projects. The Verrichia Company seeks to redevelop underutilized commercial properties and acquires desirable real estate for sustainable development and use by third party tenants such as supermarkets, convenience stores, restaurants, and specialty retailers.